One of China’s biggest social media companies has run into trouble in India.

TikTok, a video-sharing app with more than half a billion users worldwide, has been blocked after a court ruled it could expose children to inappropriate content.
The app, which is hugely popular among teenagers, was unavailable to download from Apple(AAPL) and Google (GOOGL) on Wednesday. The companies removed it from their app stores late Tuesday, people familiar with the matter told CNN Business.
The move does not affect tens of millions of existing users in India but it could become a huge setback for TikTok owner Bytedance if it prevents further expansion in the fastest growing market in the world. 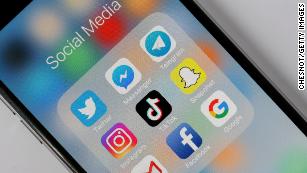 The Indian government reportedly asked Apple and Google to block TikTok after a high court in Madras, southern India, ruled on April 3 that it could expose children to sexual predators, pornographic content and cyberbullying.
India’s technology ministry did not immediately respond to a request for comment.
A spokesperson for Google said the company does not comment on individual apps, while Apple did not immediately respond to a request for comment.
TikTok has appealed the ruling and a court hearing has been scheduled for next week.
“We have faith in the Indian judicial system and we are optimistic about an outcome that would be well received by over 120 million monthly active users in India,” the Chinese company said in a statement to CNN Business.
The video-sharing app has become hugely popular in India in recent months. The country now accounts for almost a quarter of TikTok’s global user base.
But it’s the latest casualty of increasing government scrutiny of social media in India. Facebook (FB), WhatsApp and Twitter (TWTR) are facing questions over misinformation and inappropriate content as the country votes in its huge national election.
Any restrictions in India are a huge blow to tech companies and platforms. The country has 500 million people online, and a further 800 million potential users.
TikTok has already run into trouble in other parts of the world. The app was briefly banned in Indonesia last year, and in February was forced to pay a $5.7 million fine in the United States over allegations that it illegally collected personal information from children under the age of 13.