The parable of a plantain vendor? grab a cup of tea. Having laid the foundation,an entrepreneur must be prepared to dream, remain totally committed to a cause or purpose, and begin to cultivate and nurture a progressive winning attitude.

The price of success is hard work, dedication to the job at hand, and the determination that whether we win or lose, we have applied the best of ourselves to the task at hand. __Vince Lombardi

Michael  Johnson completed his secondary education on his 15th  birthday.Like most rural youth, he did not continue to the university level due to the death of his father . His mother was constantly humiliated by Mr Tom, Michael’s uncle, since she had no formal education, her income level was extremely poor and couldn’t offer a helping hand. Driven by his pity for the mother who had seven other children to carter for,Michael developed a passion for hawking to make ends meet and also offer practical financial assistance to her mother and his siblings.

Mrs. Grace Okon, Michael’s mother was always grateful to God. Praising and praying for  Michael  was always  a breakfast for her. Knowing how beneficial her son’s contribution was to the survival of her family, and encouraged him to remain focused on his chosen trade; success is the end product no matter the obstacles.

During the first homecoming of  his age grade/secondary school colleagues in the festive period, he demonstrated an exceptional degree of ingenuity from a secondary school graduate.Rather than hide from his former school mate;like most youths will,he joined the party and presented them with roasted plantain chips in little gifts packs.The little delicious chips were just about enough to stir up one’s  dying appetite, as a result creating room for those who tasted it to demand for more. 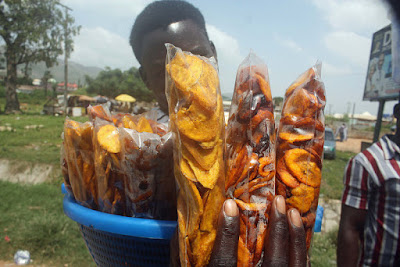 The quantity of quality plantain chips became his  unique marketing proposition,because  no one  was ever satisfied with one pack. Soon, the party gifts to his friends became the toast of the town as everyone wanted a taste of his professionally packed plantain chip.

You need to find people who will pay for your passion….will anybody give you money to do what you love? if nobody will pay you to do  what you love, you have a hobby,not a business.___Sheldon Bowles

With the interest for his product growing stronger as the day goes by, he began to increased his selling and marketing channel.When he was interrogated why the quantity was that small, he  responded by saying that no one gives away large  quantities of precious items.When they come in small bits/quantities, they tend to  stir the imagination. You will eventually demand for more if you cherish or like the little  in each pack.

Furthermore, anyone who likes it will order for more. As fate will have it, Michael lost his last brother five months into his new found venture, and lost part of his savings in the process. His mother followed three months later, and the whole journey became demanding. In order to meet his immediate needs he decided to meet with few established entrepreneurs who had once tasted his products and kept demanding.He demand for some funds to increase his production and multiply sales channels.Fortunately, his request was obliged because of the market potential of his neatly branded plantain chip. Michael employed more hands/workers , and two years after his profit multiplied.

He was able to repay his loan and established a plantain chip factory with innovative signals breaking grounds and causing go slow in market places and communities at large. It was his undying desire to establish a plantain chip brand someday that paved way for his success.Although several sacrifices was made.

More so, Michael proceeded to acquired legal registration for his newly established company. few moths later, he conducted interviews to fill in technical/key positions in his factory.The number of unemployed graduates that applied kept him astonished. Most surprising, was the CV of a university professor. He interviewed everyone accordingly and offered  preferential  treatment for the professor.

Michael became an employer of a university professor, although he had his doubts but his strong will to succeed was the determinant factor.