What You Need to Know About Xhosa–Xhosa South African Culture!

Xhosa refers to a member of a South African people traditionally living in the Eastern Cape Province. They form the second largest ethnic group in South Africa after the Zulus. Also, the Bantu language of the Xhosa, related to Zulu and spoken by over 7 million people. It is one of the official languages of South Africa.

You might want to know Who speaks Xhosa? The answer is simple–South Africans. The Xhosa language (Isixhosa), of which there are variations, is part of the Nguni language group. Xhosa is one of the 11 official languages recognized by the South African Constitution, and in 2006 it was determined that just over 7 million South Africans speak Xhosa as a home language.

The four major ethnic divisions among Black South Africans are the Nguni, Sotho, Shangaan-Tsonga and Venda. The Nguni represent nearly two thirds of South Africa’s Black population and can be divided into four distinct groups; the Northern and Central Nguni (the Zulu-speaking peoples), the Southern Nguni (the Xhosa-speaking peoples), the Swazi people from Swaziland and adjacent areas and the Ndebele people of the Northern Province and Mpumalanga. Archaeological evidence shows that the Bantu-speaking groups that were the ancestors of the Nguni migrated down from East Africa as early as the eleventh century.

The Xhosa are the second largest cultural group in South Africa, after the Zulu-speaking nation. The Xhosa language (Isixhosa), of which there are variations, is part of the Nguni language group. Xhosa is one of the 11 official languages recognized by the South African Constitution, and in 2006 it was determined that just over 7 million South Africans speak Xhosa as a home language. It is a tonal language, governed by the noun – which dominates the sentence.

Missionaries introduced the Xhosa to Western choral singing. Among the most successful of the Xhosa hymns is the South African national anthem, Nkosi Sikele’ iAfrika (God Bless Africa). It was written by a school teacher named Enoch Sontonga in 1897. Xhosa written literature was established in the nineteenth century with the publication of the first Xhosa newspapers, novels, and plays. Early writers included Tiyo Soga, I. Bud-Mbelle, and John Tengo Jabavu.

The Xhosa tribe, amaXhosa in their language, also belonged to the Nguni speaking tribes who moved into South Africa during the great southern migration.

The very first Xhosa tribes arrived on the scene in South Africa in the 14th century, spearheading the Great Southern Migration ahead of the Zulu tribes.

Originally they settled in the coastal region from the Mtamvuna river near Port St Johns in KwaZulu-Natal to the Great Fish river in the Eastern cape.

The Xhosa speaking people can be divided into quite a few different tribes with related but distinguishable heritages. The main subgroups are the Mpondo and the Thembu. Apart from them there were a number of smaller tribes such as the Bomvana, Bhaca, Fingo, Nhlangwini and Xesibe. 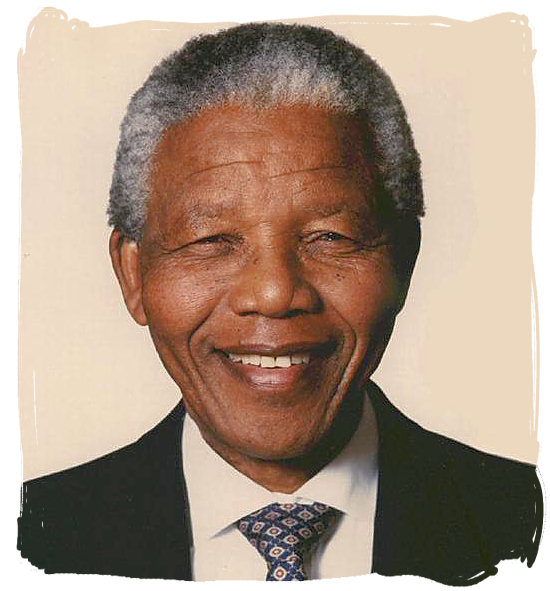 The legendary Nelson Mandela, a member of the Xhosa people and past President of South Africa.
Xhosa Tribe, Xhosa Language and Xhosa Culture in South Africa
There is some difference of opinion about the origin of the name “Xhosa”. Some say that it was derived from the name of one of their legendary leaders called uXhosa. Others say that the word xhosa comes from a word in the San or Khoikhoi language that means “angry” or “fierce”. The Xhosas describe themselves as the amaXhosa, meaning “the fierce people”.

Stories and legends provide accounts of Xhosa ancestral heroes. According to one oral tradition, the first person on Earth was a great leader called Xhosa. Another tradition stresses the essential unity of the Xhosa-speaking people by proclaiming that all the Xhosa subgroups are descendants of one ancestor, Tshawe. Historians have suggested that Xhosa and Tshawe were probably the first Xhosa kings or paramount (supreme) chiefs.

The Supreme Being among the Xhosa is called uThixo or uQamata. As in the religions of many other Bantu peoples, God is only rarely involved in everyday life. God may be approached through ancestral intermediaries who are honoured through ritual sacrifices. Ancestors commonly make their wishes known to the living in dreams. Xhosa religious practice is distinguished by elaborate and lengthy rituals, initiations, and feasts. Modern rituals typically pertain to matters of illness and psychological well-being.

The Xhosa people have various rites of passage traditions. The first of these occurs after giving birth; a mother is expected to remain secluded in her house for at least ten days. In Xhosa tradition, the afterbirth and umbilical cord were buried or burned to protect the baby from sorcery. At the end of the period of seclusion, a goat was sacrificed. Those who no longer practice the traditional rituals may still invite friends and relatives to a special dinner to mark the end of the mother’s seclusion.

Male and female initiation in the form of circumcision is practiced among most Xhosa groups. The Male abakweta (initiates-in-training) live in special huts isolated from villages or towns for several weeks. Like soldiers inducted into the army, they have their heads shaved. They wear a loincloth and a blanket for warmth, and white clay is smeared on their bodies from head to toe. They are expected to observe numerous taboos (prohibitions) and to act deferentially to their adult male leaders. Different stages in the initiation process were marked by the sacrifice of a goat.

The ritual of female circumcision is considerably shorter. The intonjane (girl to be initiated) is secluded for about a week. During this period, there are dances, and ritual sacrifices of animals. The initiate must hide herself from view and observe food restrictions. There is no actual surgical operation.

Although they speak a common language, Xhosa people belong to many loosely organized, but distinct chiefdoms that have their origins in their Nguni ancestors. It is important to question how and why the Nguni speakers were separated into the sub-group known today. The majority of central northern Nguni people became part of the Zulu kingdom, whose language and traditions are very similar to the Xhosa nations – the main difference is that the latter abolished circumcision.

In order to understand the origins of the Xhosa people we must examine the developments of the southern Nguni, who intermarried with Khoikhoi and retained circumcision. For unknown reasons, certain southern Nguni groups began to expand their power some time before 1600. Tshawe founded the Xhosa kingdom by defeating the Cirha and Jwarha groups. His descendants expanded the kingdom by settling in new territory and bringing people living there under the control of the amaTshawe. Generally, the group would take on the name of the chief under whom they had united. There are therefore distinct varieties of the Xhosa language, the most distinct being isiMpondo (isiNdrondroza). Other dialects include: Thembu, Bomvana, Mpondimise, Rharhabe, Gcaleka, Xesibe, Bhaca, Cele, Hlubi, Ntlangwini, Ngqika, Mfengu (also names of different groups or clans).

Unlike the Zulu and the Ndebele in the north, the position of the king as head of a lineage did not make him an absolute king. The junior chiefs of the various chiefdoms acknowledged and deferred to the paramount chief in matters of ceremony, law, and tribute, but he was not allowed to interfere in their domestic affairs. There was great rivalry among them, and few of these leaders could answer for the actions of even their own councillors. As they could not centralise their power, chiefs were constantly preoccupied with strategies to maintain the loyalties of their followers.

The Cape Nguni of long ago were cattle farmers. They took great care of their cattle because they were a symbol of wealth, status, and respect. Cattle were used to determine the price of a bride, or lobola, and they were the most acceptable offerings to the ancestral spirits. They also kept dogs, goats and later, horses, sheep, pigs and poultry. Their chief crops were millet, maize, kidney beans, pumpkins, and watermelons. By the eighteenth century they were also growing tobacco and hemp.

At this stage isiXhosa was not a written language but there was a rich store of music and oral poetry. Xhosa tradition is rich in creative verbal expression. Intsomi (folktales), proverbs, and isibongo (praise poems) are told in dramatic and creative ways. Folktales relate the adventures of both animal protagonists and human characters. Praise poems traditionally relate the heroic adventures of ancestors or political leaders.

As the Xhosa slowly moved westwards in groups, they destroyed or incorporated the Khoikhoi chiefdoms and San groups, and their language became influenced by Khoi and San words, which contain distinctive ‘clicks’.

Europeans who came to stay in South Africa first settled in and around Cape Town. As the years passed, they sought to expand their territory. This expansion was first at the expense of the Khoi and San, but later Xhosa land was taken as well. The Xhosa encountered eastward-moving White pioneers or ‘Trek Boers’ in the region of the Fish River. The ensuing struggle was not so much a contest between Black and White races as a struggle for water, grazing and living space between two groups of farmers.

Nine Frontier Wars followed between the Xhosa and European settlers, and these wars dominated 19th century South African History. The first frontier war broke out in 1780 and marked the beginning of the Xhosa struggle to preserve their traditional customs and way of life.  It was a struggle that was to increase in intensity when the British arrived on the scene.

The Xhosa fought for one hundred years to preserve their independence, heritage and land, and today this area is still referred to by many as Frontier Country.

During the Frontier Wars, hostile chiefs forced the earliest missionaries to abandon their attempts to ‘evangelise’ them. This situation changed after 1820, when John Brownlee founded a mission on the Tyhume River near Alice, and William Shaw established a chain of Methodist stations throughout the Transkei.

Other denominations followed suit. Education and medical work were to become major contributions of the missions, and today Xhosa cultural traditionalists are likely to belong to independent denominations that combine Christianity with traditional beliefs and practices. In addition to land lost to white annexation, legislation reduced Xhosa political autonomy. Over time, Xhosa people became increasingly impoverished, and had no option but to become migrant labourers. In the late 1990s, Xhosa labourers made up a large percentage of the workers in South Africa’s gold mines.

The dawn of apartheid in the 1940s marked more changes for all Black South Africans. In 1953 the South African Government introduced homelands or Bantustans, and two regions ‘Transkei and Ciskei’ were set aside for Xhosa people. These regions were proclaimed independent countries by the apartheid government. Therefore many Xhosa were denied South African citizenship, and thousands were forcibly relocated to remote areas in Transkei and Ciskei.

The homelands were abolished with the change to democracy in 1994 and South Africa’s first democratically elected president was African National Congress (ANC) leader, Nelson Mandela, who is a Xhosa-speaking member of the Thembu people.

Femi Fani-Kayode: Revolution in Nigeria, Sowore and the emissary of Satan

What you need to About Swahili: An In-Depth Guide on How to Learn Swahili